Dodge is one of the oldest American automotive brands, established in 1900 as Dodge Brothers Company. At first Horace Elgin Dodge and John Francis Dodge supplied automotive parts for numerous automakers in Detroit, but developed into an independent vehicle manufacturer by 1915. However, a sudden twist of fate changed it all when both brothers died of pneumonia in 1920 and the company struggled to run the business efficiently.

In 1928 it was sold to Chrysler and has been part of the giant car manufacturer ever since. For most of its history Dodge has been associated with trucks, commercial vehicles and large passenger cars. The company survived through the 1973 oil crisis and went on to produce trucks, minivans, performance vehicles and family cars, sharing platforms with Chrysler. In 2011, after Chrysler had gone bankrupt and had been sold to FIAT, Dodge went through a major reorganization and was separated from Ram division and SRT performance studio. 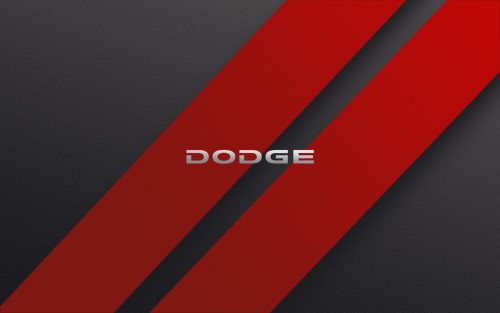 Through its long history Dodge has used different logos that had little in common. Besides, Dodge used different logos depending on the model and vehicle purpose. Trucks, passenger cars and performance vehicles typically held different logos on grills. The first logos featured overlapping D and B letters for Dodge Brothers. The earlier versions saw the letters painted gold and embedded into what seemed to be a bearing or a simple circle with black background.

From 1914 to 1927 some vehicles were decorated with the letters D and B placed inside two triangles that resembled of a Jewish Star of David. In 1932 Dodge used a leaping ram as a hood ornament for the first time. However, it did not become the company’s logo at the time as Dodge went on to use a three-point deltoid on maroon background, embedded into a silver circle with ‘Dodge Division’ words carved in it. In 1955 Dodge adopted two overlapping arrows, painted red and blue and having different shapes, as a logo. Since early 1960s Dodge used Chrysler’s Pentastar, but painted it red to avoid confusion with the parental company that had a blue badge. The manufacturer used a ram as the company’s symbol on trucks through many years, but only adopted it as a common logo in 1993.

Since 2011 the ram’s head has been the exclusive logo of Ram Trucks, while Dodge introduced the all-new logo, a stylish silver Dodge inscription matched with two inclined red stripes at the right side.

Since takeover by FIAT Dodge has been going through major restructuring and in 2011 was divided into several brands. Ram went on to use the ram’s head as a symbol, while Dodge’s marketing specialists came up with another logo, a simple yet commanding respect Dodge word matched with two red stripes, symbolizing the company’s performance-oriented line-up.

Shape of the Dodge Symbol

The Dodge inscription is rendered in custom-made font that reflects the brand’s powerful character. The letters are flattened and stretched horizontally to give that solid look. The two red stripes at the right side of the logo overlap the letter ‘E’ and are tilted from left lower side to right upper side.

Color of the Dodge Logo

The current Dodge logo features several shades of silver and red colors. The Dodge inscription is all silver, but has a light hue at the top and dark, or rather grey, at the bottom. It stands for grandeur, dignity and sophistication. The two inclined stripes at the right side of the logo are painted red to symbolize passion and excitement, associated with the company’s vehicles. 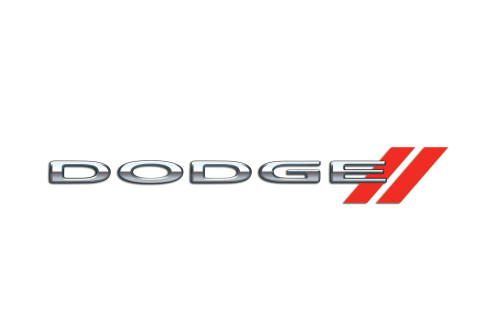